Description: Although the official history of the Jewish Brigade Group (a unit of some 5,000 Jews who fought with the British Eighth Army in Italy in the waning months of the conflict) has been written, Blum (Wanted! The Search for Nazis in America) breaks new ground by looking into the clandestine operations that occurred after the shooting had stopped. Once they learned the true extent of the holocaust, soldiers of the brigade began using intelligence reports to pinpoint the location of former SS officers and camp guards. The enraged Jewish troops took vengeance into their own hands, eventually slaying hundreds of Nazi death dealers. Blum follows the story of three men Israel Carmi, Johanan Peltz and Arie Pinchuk in detail, interviewed dozens of others, read unpublished personal memoirs and had Hebrew-language documents translated for him. During the war, the more daring Jewish soldiers formed a secret unit that appropriated British supplies trucks, weapons and food and diverted them to ships heading illegally for Palestine The plan included the “repatriation” of thousands of war orphans, who were clandestinely taken from displaced person camps and smuggled to Palestine. The underground Jewish Haganah figured prominently in these operations, which contributed directly to the creation of Israel. Blum, twice nominated for a Pulitzer as a New York Times investigative reporter, and now a Vanity Fair contributing editor, presents the material masterfully, building suspense and carefully documenting all the action.

Tarantino’s Inglourious Basterds is loosely based on this – from the US pov only, of course.

So this is the start of the group that were to dedicate their future lives to the hunting down of Nazi criminals. And this brings me smack bang back into an interesting discussion at the end of The Railway Man – would forgiveness given straight away have been a better way forward: the unforgivers turning bitter and twisted over time. Is that how we view Israel today? HAH – big questions and only little old me; perhaps there are no answers.

The Brigade is a fascinating, action-packed non-fiction that reads like a full-on adventure thriller, which proves yet again, fact is waay more bizarre than fiction. Fully recommended, and four gleaming menorahs. 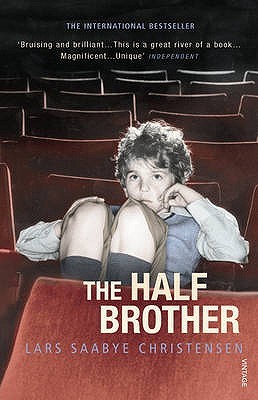 Translated from the Norwegian by Kenneth Steven

Opening: Thirteen hours in Berlin and I was already a wreck.

Page 19: ‘Like a Sphinx,’ I replied. ‘Like a blue sphinx that has torn loose from a floodlit plinth.’

Page 29:  ‘Now I’ll tell you word for word what that wretched creature wrote! We, his close followers, now bow our heads at his death.’ (This refers to the afternoon edition of Aftenposten 7th May 1945.)

“ The Chocolate Girl pulls Arnold down beside her and puts her arms around him. Arnold grows in her arms and she explains just about everything to him.”

page 141:
Mundus vult decipi – The world will be taken in
Ergo decipiatur – thus it is deceived

‘And besides, they haven’t tarmacked over the Moskenes whirlpool yet.’

Page 239: “ Livin’ Lovin’ Doll – Cliff Richard Mum and Dad danced in the living room and for the remainder of the night they were equally loud in bed.”

‘Why is it called Greenland when there is only ice there?’ I asked. ‘Because the first people who reached it found a beautiful flower called convallaria, Barnum.'”

Page 335: I skipped supper and went to bed before ten, even though I wasn’t especially tired and I actually loathed the slow movement before you fell asleep, when you just lie there and time stretches like an elastic band, like round brackets, like a blue balloon.

Page 475: And Lauren Bacall looks at Bogart – she glows, glows in black and white, and her nostrils flare like an animal’s, the nostrils of a lioness. And she laughs – Bacall’s laughter – she mocks him, You’re a mess, aren’t you? And Bogart just answers, I’m not very tall either. Next time I’ll come on stilts.

IMHO The defining moment of this story comes on Page 686: ‘What’s your favourite film?’

She smiled, pleased with the answer. ‘So your script is a kind of response to Hamsun?’

‘You could well say that,’ I agreed.

‘And your description of this farm, which is almost synonomous with a penal colony, is a kind of revolt against Hamsun’s fascism?’

The best summation I can come up with is that this documents the Norwegians return to Hamsun’s body of work in these years since he wrote that damnable obituary and this story is Hamsun-esque with a modern makeover. Truly astounding.

Read from October 19 to 20, 2010
** spoiler alert ** A keeper for sure; one never knows when one can break out the Nordic war-boat and head out to investigate the islands. A meandering description with black and white photos dotted throughout, also a few diagrams and maps.

About the author (wiki-sourced) – Adam Nicolson is the son of writer Nigel Nicolson and grandson of the writers Vita Sackville-West and Sir Harold Nicolson. He was educated at Eton College and Magdalene College, Cambridge and has worked as a journalist and columnist on the Sunday Times, the Sunday Telegraph and the Daily Telegraph. He is a Fellow of the Royal Society of Literature and of the Society of Antiquaries of Scotland.

Nicolson was married to Olivia Fane from 1982 to 1992. They had three sons.[1] Since 1992 Nicolson has been married to Sarah Raven. He and his wife have two daughters and live at Perch Hill Farm[2] in Sussex and at Sissinghurst Castle in Kent.

Grandmother(Vita Sackville-West) died and left father some money and an advert had been seen in the Daily Telegraph. Some previous owners were Compton Mackenzie, Lord Leverhulme and more recently, a racehorse breeder. It doesn’t take a genius to see that this was not a good place to rear Derby winners

Dylan admires ……. the medieval Laugharne castle. The foreground shows the rear view of the wooden sculpture of Dylan Thomas set in the Millennium Garden

Recorded at the Laugharne Live Festival, in the grounds of Laugharne Castle, West Wales. Five leading writers and artists reflect on the ways in which they connect with one of Wales’s most famous cultural exports, Dylan Thomas.

Episode 1: Professor John Goodby is one of the world’s most respected academic authorities on the poetry of Dylan Thomas. Using poems such as the radiant “In the White Giant’s Thigh”, “And death shall have no dominion” and “A Refusal to Mourn” he explores how the boundaries which Dylan Thomas crossed in both life and art have made it difficult for critics to pigeon-hole his legacy.

Episode 2: Andrew Davies reflects on the influence of Dylan Thomas on a child growing up in Wales in the 1950s, with aspirations to be a writer. A day trip to Rhossili beach and a Cornish pasty chimed with Davies’s role model’s account in “Portrait of the Artist as a Young Dog”, but was this the gateway to a future as a poet?

Episode 3: The poet and writer Gwyneth Lewis, whose words are emblazoned over Wales Millennium Centre, takes a personal journey through the language of Dylan Thomas. She argues that to appreciate the work fully we must understand the poet’s rigorous practice and detailed knowledge of poetic history and tradition.

Episode 4: Linking up from New York, writer, poet and activist Kevin Powell looks at Dylan Thomas’s far-reaching influence on Black American writers, from his own introduction to Thomas’s words in the new poetry and spoken-word scene happening in New York in the early 90s, to the new wave of Black American artists inspired through hip-hop, spoken word and America’s oral tradition.

Episode 5: Poet and musician Twm Morys explores the links between Wales’s poetic heritage and Dylan Thomas’s writing. Drawing on memories of living in Thomas’s hometown of Swansea, he considers whether Thomas’s writing is universally acknowledged to represent the cultural landscape that nurtured its creation. [I loved this one]

Dylan Thomas reads After the Funeral (In Memory of Ann Jones)

Listen also to 120 mins from the Live Festival: http://www.bbc.co.uk/programmes/b042bk3d

I have spent many a day on Rhossili and it is as beautiful, and as long, as described: