Description: Victory presents a philosophical story of a man who learns that his own philosophy has robbed him of a life worth living. The novel is Conrad’s answer to the prevailing view that only facts matter, that emotions such as love have no basis in reality.

The protagonist, Axel Heyst, is the son of a philosopher who once wrote, “Of the strategems of life, the most cruel is the consolation of love.” His philosophy Conrad compares to a “terrible trumpet which had filled heaven and earth with ruins…”After his father dies, Heyst wanders the globe, looking “only for facts” until he becomes enchanted with a South Sea archipelago. Therafter, he is drawn to two people who provide models of friendship and love. Morrison, a small craft owner whose generosity has left him bankrupt, Heyst helps out of his bind only to fail to understand why the man is so grateful and anxious to repay him. But it is the girl Lena who fills him with an emotion that he cannot express or understand until the novel’s end. After rescuing her from a life of exploitation, Heyst takes her back to his island where he is determined to live apart from the world.

This has been a listened to bit by bit over the last month and I found it compelling: couldn’t wait to get a few free moments to listen to some more. A tragic, psychological tale lushly written and so well read by Guidell, whose voice lends itself to the classics. There is a film of this to hunt down – where’s my net!

Shall have another tilt at Heart of Darkness to see what I make of it now.

Recommended for: BBC Radio Listeners
Read from January 29 to February 01, 2014 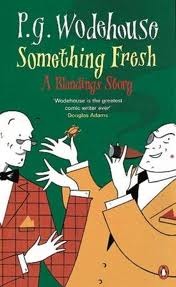 Description: One thing that constantly disrupts the peace of life at Blandings is the constant incursion of impostors. Blandings has impostors like other houses have mice.

Now there are two of them – both intent on a dangerous enterprise. Lord Emsworth”s secretary, the efficient Baxter, is on the alert and determined to discover what is afoot – despite the distractions caused by the Honorable Freddie Threepwood”s hapless affair of the heart.

2/2 Ashe and Joan’s battle to secure the precious scarab is becoming intense. Baxter is in hot pursuit, and Lord Emsworth is on alert for midnight marauders. With Ian Ogilvy.