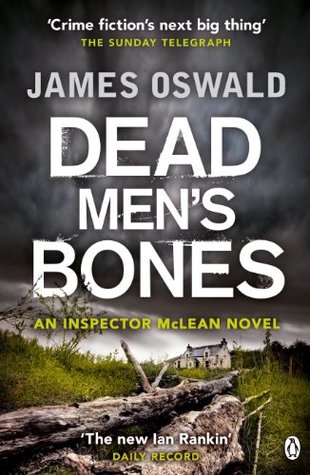 The body of a prominent Scottish MP is discovered outside his home, a remote house in North East Fife. In a horrifying attack, Andrew Weatherly has killed his wife and two young daughters, before turning his gun on himself.

The question on everyone’s lips is why would this successful and wealthy man commit such a gruesome crime?

Inspector Tony McLean is surprised to find himself at the centre of this high profile investigation. The deeper he digs, the more McLean realizes he is being used in a game between shadowy factions from the world of power and privilege.

Pressure is on to wrap up the case. That would go against everything McLean believes in . . . but to carry on will threaten the lives of his closest friends and colleagues.

Opening: The pain is everywhere.
It pulses through his head is if there’s a hole in his skull and someone is squeezing his brain in time to his heart beat.

Several pals have reported that series is incredibly good and given this, my only foray so far, proves them right. It is the marvellous tone of the proceedings that makes this book stand out: the backdrop of Scotland in referendum year, the police coming to terms with Police Scotland and all the insecurities roiling in the wake of these issues. A lot of space is given over to ex-soldiers being unable to connect or settle down to civvy life after the horrors of Afghanistan and Iraq, so they become foot soldiers in the army of the homeless; a stark look at how Community Care fails in the bigger picture.

Inspector McLean is a man with recent injuries and who has to attend physiotherapy and counselling sessions and I mean to backtrack to the previous books to find out the answers to some of my questions, however this works well enough as a standalone.

The middle section of this story was eye-scorching, nevertheless, slight cracks started appearing towards the end; a supernatural element was alluded to on several occasions that seemed at odds with the story that had gone before. It could be posited that this was excellent police procedural for a good three quarters and then it seemed to change genre and leave some unresolved issues. For these issues Dead Man’s Bones loses glister where more patience in the fine-tuning would have made all the difference.

Would I recommend it? Oh yes, but with the above caveats. Three and a half bowls from Bobby’s soup kitchen.

James Oswald is the author of the Detective Inspector McLean series of crime novels. The first three, Natural Causes, The Book of Souls and The Hangman’s Song are also available as Penguin paperbacks and ebooks. He has written an epic fantasy series, The Ballad of Sir Benfro, which is published by Penguin, as well as comic scripts and short stories.

In his spare time he runs a 350-acre livestock farm in North East Fife, where he raises pedigree Highland Cattle and New Zealand Romney Sheep.

Read from March 04 to June 27, 2014
Description: A fretful inspector of weights and measures, McX is unhealthy, unsightly, unloved and, to top it all, he comes from Fife. His grim existence centres on the Auld Licht, a dank, maloderous public house haunted by the dank, maloderous and dreadful McPint; a man unstintingly devoted to beer, peanuts and pornography. McX, meanwhile, dreams of fair women and requited love in a rural idyll – a Scotland without rain, without repression, and without McPint. He resolves, quite simply, to escape.

Little know you of the hearts
I have hidden here. Hogg

Opening: Consider a long and famous river, it teems with salmon and story. Winds majestic through the most various of Scottish shires. Where it passes under several bridges and reflects a suggestion of Georgian elegance, sad tales begin.

Although this was published in 1991 it does read like an out-in-the-sticks 70s offering, I’m sure that the hugely offensive terms ‘wogs’ and ‘niggers’ had long been shown the door by everybody else’s 1990s.

Take no notice of the Aberdeen-esque chunterings from other dour reviewers, this is ladishly pithy, gloomily pawky, and a fat satirical prod at lowlanders in general and Fifers in particular: I’m sure Ian Rankin would have had a chuckle.

The sun is known in Scotland, but chiefly through myth and legend.[..] Appearance of chicken flesh at the first jerk of the thermometer: Scots in the sun. What need to brown yourselves? You’ll be roasting in Hell soon enough. Page 103

Good enough as a palate-cleanser.

Description: Karen Pirie is the newly appointed Deputy Inspector of the Cold Case Unit, and her first investigation takes her 25 years into the past to the national miners’ strike. At the time, a kidnapping gone wrong left a small boy missing, but new evidence suggests he might still be alive. As Pirie delves deeper, she realizes the boy’s disapperance may be linked to another cold case involving a missing miner.

Having secured a few McDermid titles, I seemed to have kicked off with the wrong one, ‘A Darker Domain’ held scant interest; nowhere near ‘A Place of Execution’.

Was wanting a KAPOW and reaped a fizzle.

Still, it kept me company whilst administering tea, biscuits and aspirins to the sick and needy; dear M has a serious bout of ::Man::Cold::