bookshelves: gutenberg-project, winter-20152016, published-1951, shortstory-shortstories-novellas, sci-fi, author-love
Read on February 13, 2016
Description: A LITTLE JOURNEY (August 1951) marks Bradbury’s final contribution to the editorial decade of Horace Gold, the editor of GALAXY magazine. Like THE MARTIAN CHRONICLES and THE FIREMAN, the story demonstrates Bradbury’s characteristic blending so early in his career of the sentimental and the transcendent, the homely and the mystical. Bradbury’s old women in space and their strange outcome are reminiscent of his more famous story KALEIDOSCOPE (published in THE ILLUSTRATED MAN) and its conclusion shows unusual if understated power. Bradbury’s THE FIREMAN (the short-form version of FAHRENHEIT 451 which was doubled in length for its book publication in 1953) appeared in the February 1951 issue of GALAXY and further solidified GALAXY’s reputation, as a magazine of unprecedented originality and ambition. Gold’s commitment to the highly ambitious THE FIREMAN was, then, courageous for its time and gave publicity to the editor’s insistence that GALAXY was an entirely new kind of science fiction magazine, one which was far more oriented toward style and controversial social extrapolation than the other markets ever had been. Although THE FIREMAN and THE MARTIAN CHRONICLES had been published earlier to significant attention, Bradbury in 1951 was by no means a writer of substantial reputation and his work was regarded by most science fiction editors and readers as marginal to the genre. 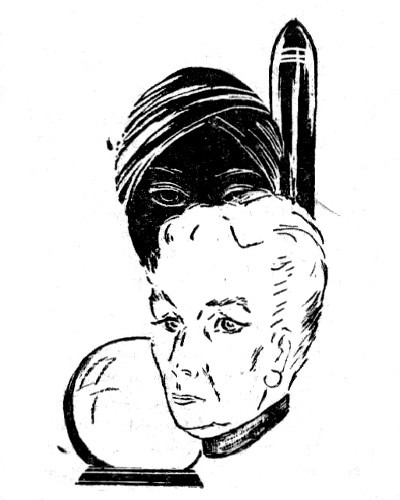 Opening: None of these people had ever shaken Mrs. Bellowes’ faith, even when she saw them sirened away in a black wagon in the night, or discovered their pictures, bleak and unromantic, in the morning tabloids. The world had roughed them up and locked them away because they knew too much, that was all.

And then, two weeks ago, she had seen Mr. Thirkell’s advertisement in New York City:

COME TO MARS!
Stay at the Thirkell Restorium for one week. And then,
on into space on the greatest adventure life can offer!
Send for Free Pamphlet: “Nearer My God To Thee.”
Excursion rates. Round trip slightly lower.

“Round trip,” Mrs. Bellowes had thought. “But who would come back after seeing Him?”

I suppose that any negativity towards Bradbury equates to deal-breaking: he had such a humanist heart and couched it in beautiful writing, and he always added in a dash of humour and a soupçon of darkness. That is the case here.