Description: When last we saw Viktor, in the final pages of Death and the Penguin, he was taking his seat aboard the Expedition to Antarctica plane, fearing for his life. Meanwhile, Penguin Misha was left abandoned in a clinic recovering from a heart transplant. Now, in Penguin Lost, we join Viktor for his brief stay in and escape from Antarctica to discover that, characteristically, he has fallen on his feet. Visiting, on his return to Kiev, Penguinologist Pidpaly’s grave, Viktor mistakes an elusive child in white shirt and black shorts for Misha on funeral duty. He is first interrogated and then befriended by a Mafia boss who, while burying his contract-killed son-in-law, is also running for election as People’s Deputy. Viktor helps in his campaign, and is rewarded with introductions to those able to further his desperate search for Misha, said to be in the zoo of the murderous Chechen Khachayev. For Viktor, it is both a quest and an odyssey of atonement; for the reader, an experience as rich, topical and black-humouredly illuminating as Death and the Penguin.

Opening: It took Viktor three days to recover from the four spent crossing Drake Passage. In which time, the scientists who had sailed with him from Ushaia in the Horizon were already acclimatized and working fast to complete measurements and analyses before the onset of the polar night.

As you can see, this book starts off where the first one finished. Neat!

Vernadsky Base: (page 7)[..]after losing 16 men and two supply aircraft, the British had presented it [the base] to Ukraine.

Vernadsky Station, a Ukrainian base which was formerly the British ‘Faraday’ base. 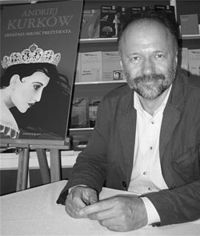 “Under pressure from the Kremlin, Russian airlines — the only ones now flying to the peninsula — have slashed prices on flights. I think Russian oligarchs will soon receive an order from the Kremlin to buy holiday packages to Crimean sanitoriums and resorts for their employees.”